President of the Executive Board of SOFIMUN 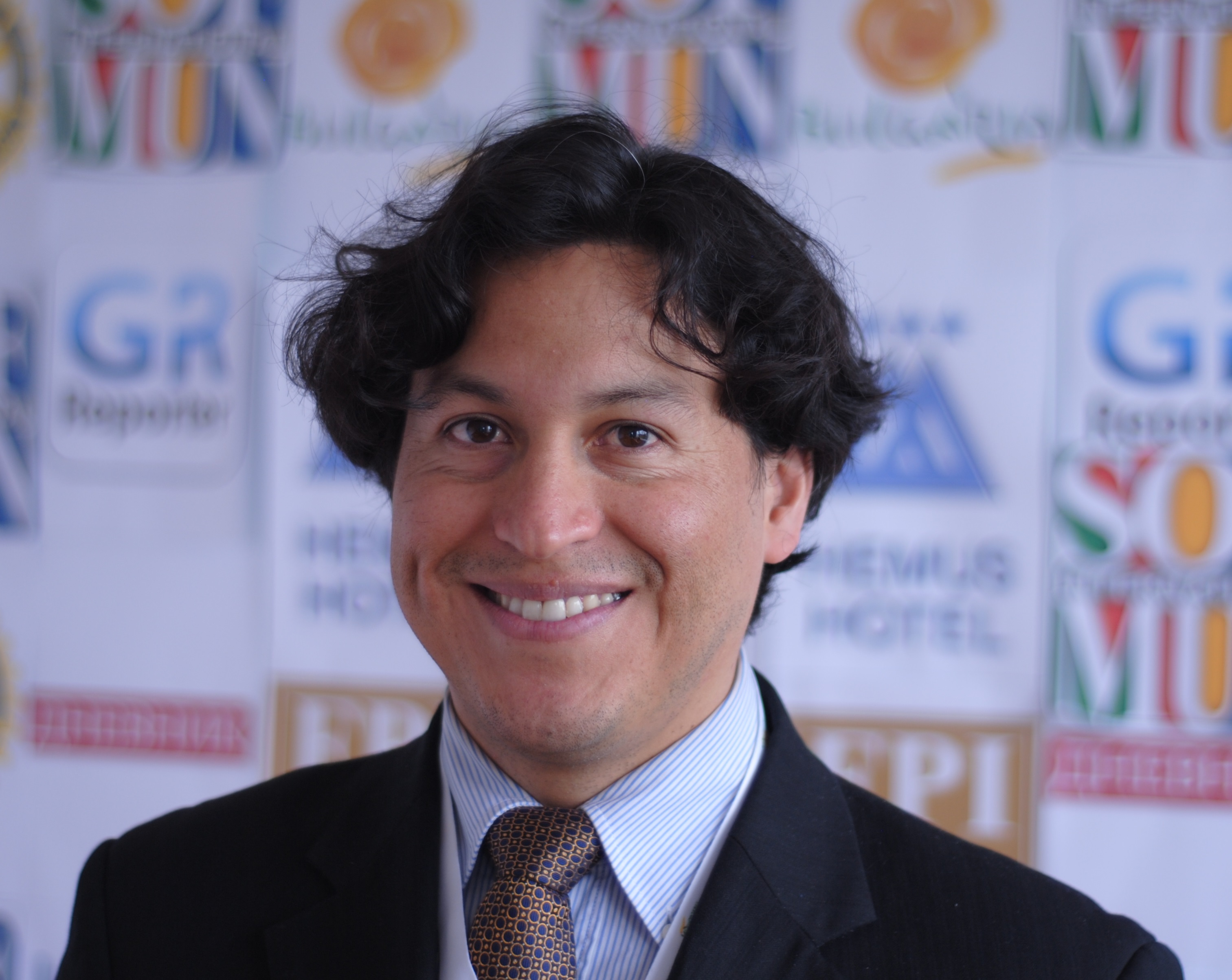 Jose Antonio Villena Sierra, President of the Executive Board of SOFIMUN

Ecuadorian, he is a PHD Candidate in Constitutional and International Law at the University of Salamanca. After getting a Master in Government and Public Administration, he has been Director of the areas of Constitutional Law and Human Rights of Transparency International, chapter Ecuador, and for electoral and constitutional-reform processes in Ecuador. After that, Jose Antonio Villena became external adviser for the trade-commerce agreement between the European Union and South American Countries.
In the area of MUNs, he took part as Secretary General for NAPOMUN (Cluj Napoca, Romania) and MUNUSAL (Salamanca,Spain). He also was a chairperson for BIMUN(Bonn, Germany), PIMUN (Paris, France), KULMUN (Leuven, Belgium), ORADMUN (Oradea, Rumania) and MILMUN (Milano, Italy). His current project is about leading the integration process in South America, for the creation of a South American Community of Nations as Advisor and trainer for “The Climate Project “ (Al Gore’s Nobel Prize Project for Climate Change).

Georgi Kalchev is born оn 21 of April 1996. He is studying Banking in the National Trade and Banking High School of Sofia, Bulgaria. He speaks three foreign languages: English German and Spanish. He easily adapts to new environments due to his participation in summer camps for studying English in the UK and Switzerland.
Georgi has won many awards for his representative skills. He has qualified at final stages in numerous inter school tournaments. He actively plays many sports like football, basketball and tennis on court, one of his favourite activities is skiing which he practices for about ten years. He was a trainee in a Bulgarian company „Nord Shipping” Ltd which specializes in trading with oil products and a Swiss commercial agency.
Since 2011 he participates in Rotary International youths programme Interact as a secretary . Currently he is a president of the first community based Interact Club in Sofia – “Sredets”. He is a Co-Organizer of the First National Simulation of the Bulgarian Parliament. He was a participant in the Global Compact of the 5th edition of SOFIMUN. He was a Team Manager of the last two conferences of SOFIMUN. This year he will take the position of Conference Manager of SOFIMUN 2015. 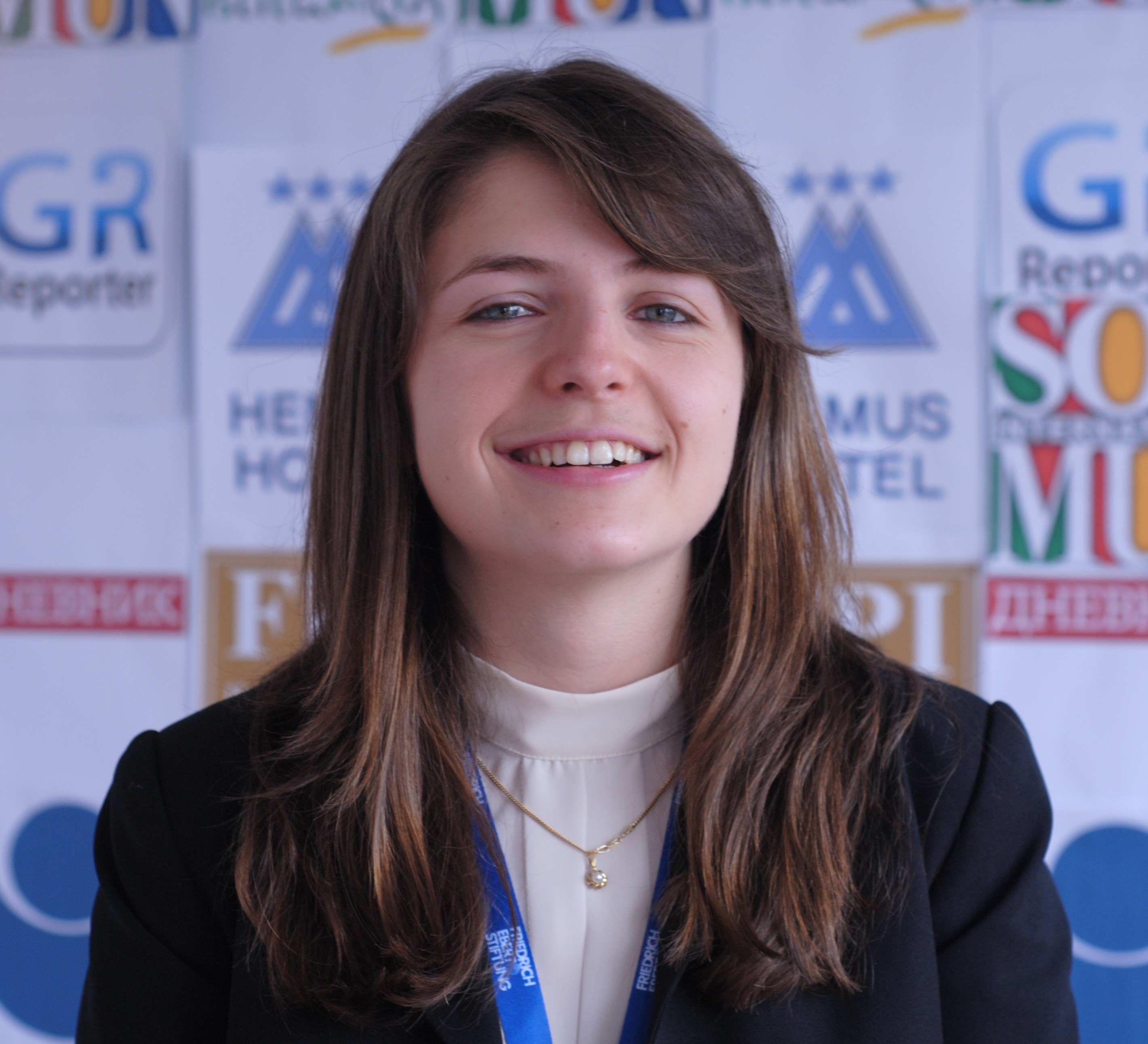 Born and raised in the capital of Bulgaria – Sofia, Polina has a bachelor degree in “Journalism” from the Sofia University “St. Kliment Ohridski”. She studied “Communications” abroad at the Stuttgart- Hohenheim University in Germany for a year. In 2012 she had got a Certificate from the IFP school for journalists in Munich, Germany. In 2013 Polina took part in MUN conference for the first time, but this was not her first intercultural experience: in 2008 she represented Bulgaria in Moscow, Russia on behalf of the project “Samarskoe znamya” and in 2009 she was a Bulgarian delegate at the scholarly visit in Europe University “Viadrina” in Frankfurt (Oder), Germany.

Polina is bearer of three national rewards for young talents and for achievements in the field of journalism. At the moment she works as a correspondent and photographer for the Bulgarian-Greek website GRReporter. Last year she went on a reporting trip to Brazil to cover the results from the presidential elections in the country. This year Polina is doing an internship in the German Bundestag as an assistant to one of the deputies in the parliament. As the News Director of SNN, she is looking forward to SOFIMUN 2015. She is excited to gain and exchange experience with people from all over the world and meet young and motivated professionals, who are prepared to create a positive climate not only in their media team, but also in their auditory.

CEO of the SOFIMUN Foundation 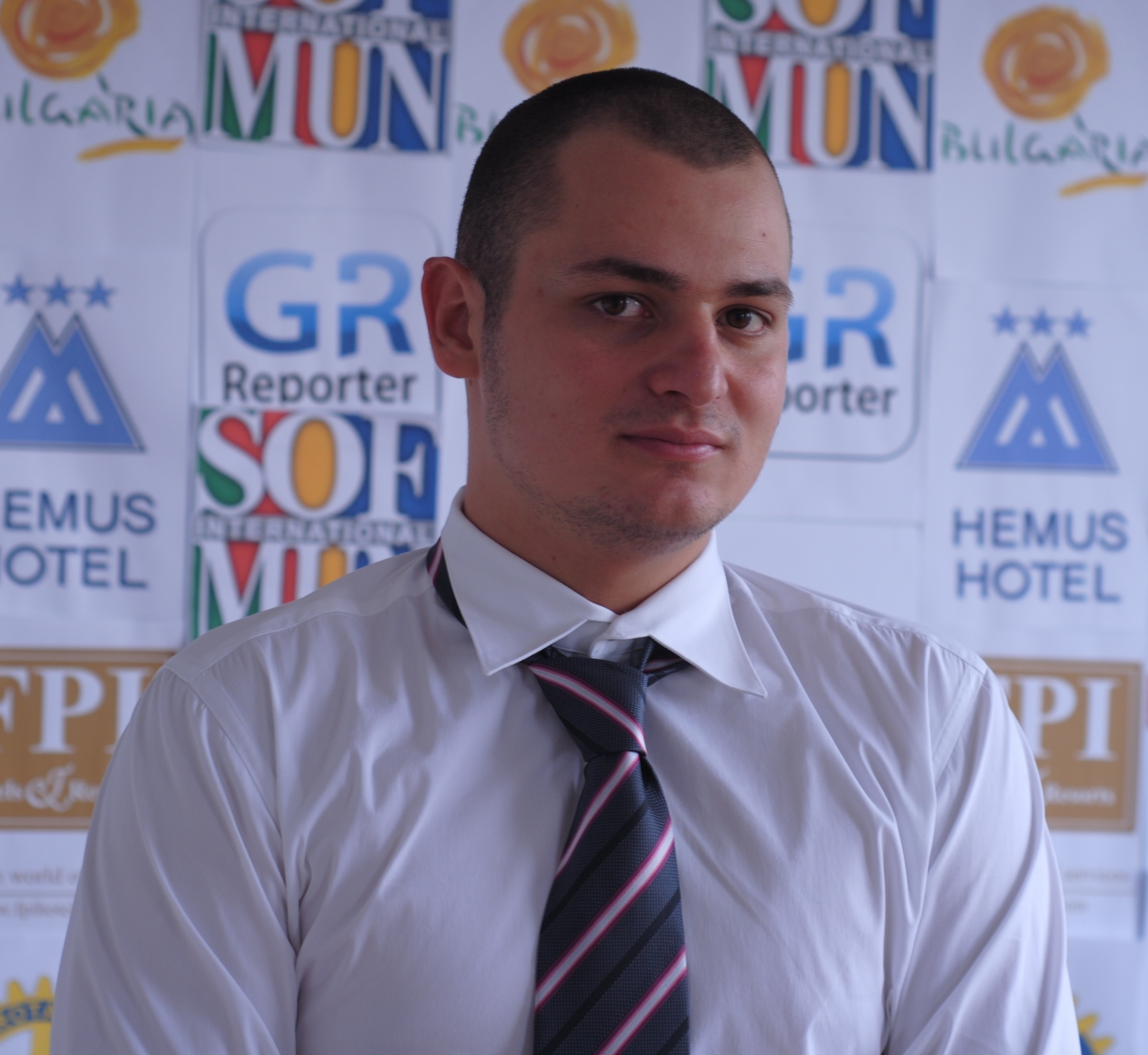 Milen Christov is born in 30 of January 1994 in Sofia. He is very interested in sports since little, so he used to play basketball for the Bulgarian’s police team and also the champion of Bulgaria Lukoil Academic. He is skiing for 15 years, but in 2009 he got to know with NGO. He first became a member “Bulgarian’s children and Youth Parliament” and in the next years continue by participating club “Economist”, club “Investor” and formed the student council in the National Business and Finance High School.
From 2011 proudly participated in Rotary International youths programme Interact, as a charter president and co-founder of the first community based Interact Club in Sofia – “Sredets”. Where organized and participate in a lot of projects such as the fourth SOFIMUN conference and the First National Simulation of the Bulgarian Parliament.

By now only 3 years after started working in the youth policies sphere he has been participating in the 69th International EYP session and worked with the “Youth In Action” programme, now only 18 years old as the youngest member of the team he was Managing the Social and Culture events in the 5th SOFIMUN conference. Now he is the CEO of the SOFIMUN Foundation.

Alexandra Sverrisson was born in Sofia, Bulgaria, but also has Icelandic roots. After graduating from the 35. “Dobri Vojnikov” language school in Sofia with a German diploma, she started studying Media Science and Film Studies in Berlin, Germany. At the moment she is focused on her Communications Internship at adidas HQ in Germany.

Alexandra has always been a passionate writer and already has the big prize from the most prominent Bulgarian literature contest Petya Dubarova (2009) and a published book of poetry (2010) in her list of achievements. For the moment being she is focused on gaining ground in the journalistic field.

Alexandra joined the SOFIMUN unit at the 6th edition of the conference and took over the duties of a press officer: the conduction of interviews, the coverage of the ongoing debates, the composing, editing and publishing of the daily newspaper; she also took over the anchor position in the SNN news broadcast. Alexandra proved herself to be very hardworking, flexible and productive during the conference, which won her a place in the permanent Executive Board of SOFIMUN.

Secretary of the Executive Board of SOFIMUN

A self-confessed MUN addict from Mongolia, Muni started his MUN career three years ago in Moscow, Russia where he has lived for the better part of his life. Since then he has taken part in a number of conferences including SOFIMUN. He has previously taken part as the chair of the Human Rights Council and as the delegate of USSR in the Historical Security Council in SOFIMUN 2012 and 2013 respectively.

Muni is a first year Politics major at the Minnesota State University Moorhead in the US.  He got involved in MUN’s more than 5 years. Over his MUN career he has been to multiple conferences where he has served as a delegate, chair and Secretary General amongst other positions.  He came to SOFIMUN in 2012 as the chair of the Human Rights Council and returned the following year as the delegate of the Soviet Union in the Security Council. He has also done an internship with the UN office of the High Commissioner for Human Rights in Moscow, Russia in 2012.

Stefano Castagna is a 5th year Law student at Bocconi University, Milano. He is a member of Bocconi International Law Society and Jus Vivens. During his studies as a Law undergraduate, Stefano has enjoyed studying ant-fraud and computer forensics too. He is a passionate of ADR, investments, corporate and trade.

Stefano hopes one day to work in the field of International Arbitration. He has been to a number of MUNs, starting from SOFIMUN 4 and since then has travelled all over the world, sharing the passion of Model UN. In nearly all simulations Stefano represented the United Kingdom of Great Britain and Northern Ireland. Only once he represented an NGO at a crisis simulation.

Stefano speaks fluently English, Spanish and Italian, but has studied other languages too. He has taken part to the THEMIS program and has been exchange student at ESADE University. Stefano is currently participating as a member of Bocconi team to the Vienna Vis MOOT. He is a member of its jurisdiction sub-team.  In his free time, he loves to read and paint, when he finds the time.  Latin and ancient Greek authors are his favorites.

Stefano is free to answer to any pertinent questions you wish on SOFIMUN and the MUN world.

Reporter for the SOFIMUN News Network 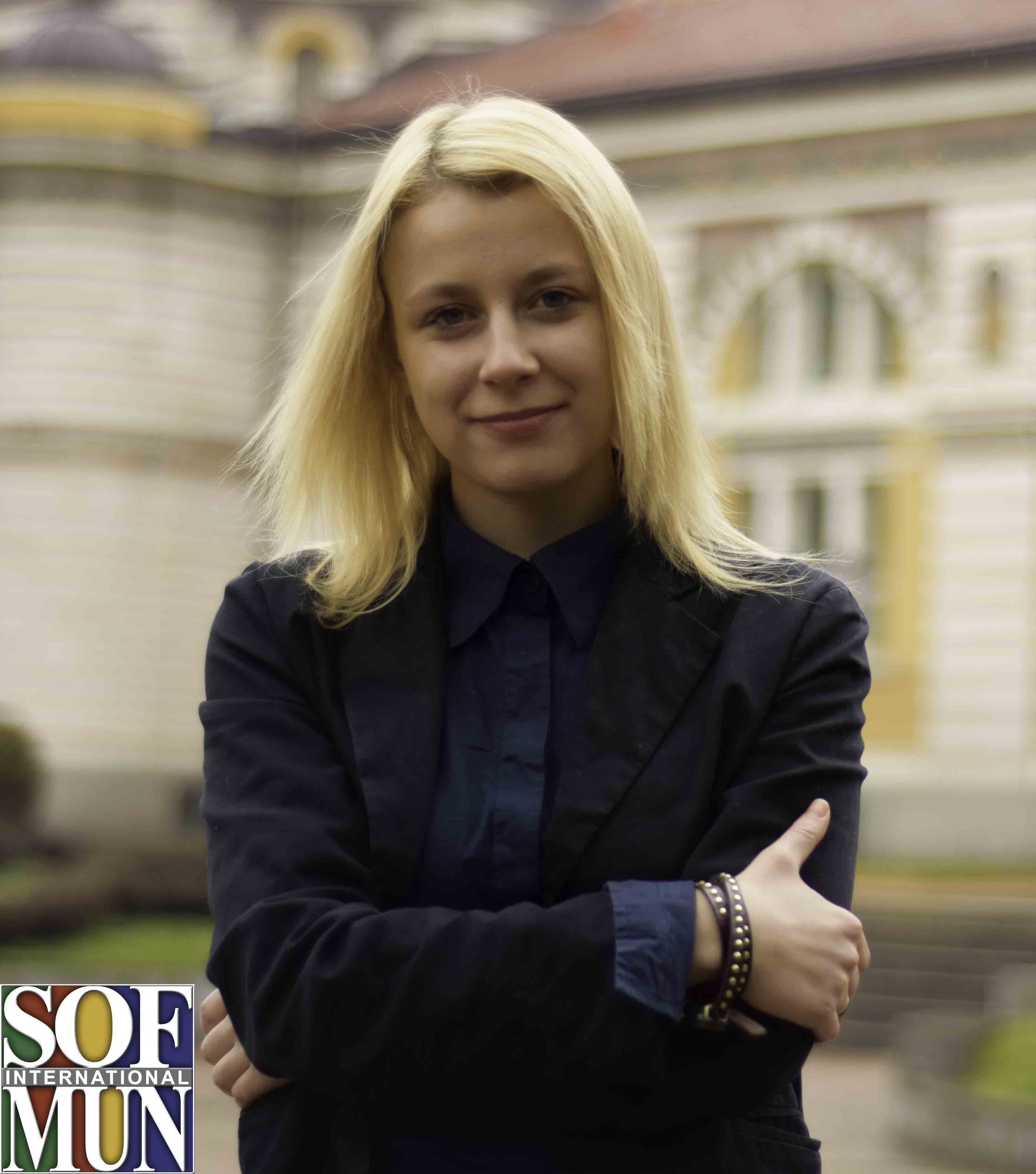 Aleksandra Dzhermova is born in Sofia, Bulgaria and she is currently in her first year of Journalism studies at the Sofia University “St. Kliment Ohridski” pursuing a Bachelor degree.  She has interests in a variety of social activities such as volunteering, European youth projects, campaigning and promoting different good practices and ideas among youngsters. Traveling  trough many countries and meeting a huge number of people from different cultures and nationalities gave her an opened mind, global perspective and a genuine flair for discovering and interacting with the rest of the world. It also made her curious for understanding different political and social issues.

For several years Aleksandra has served as a volunteer and project coordinator at “Professional forum for education”- a renowned bulgarian NGO that promotes non-formal methods of learning, european citizenship and youth mobility.

Aleks was invited to work as a reporter for the SNN  where she can help the team and receive valuable know-how and skills that will furthermore enhance her chances for having a successful career and being an active citizen of the bulgarian and the global society. She is very positive  for the upcoming SOFIMUN 2015 conference and is waiting with excitement to get involved  in to the day to day activities of the event. 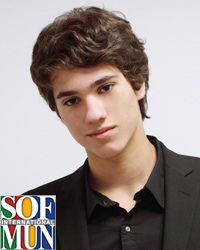 Although being of Bulgarian descent Nicolas Avramov was born and raised in Germany. Since childhood he has been professionally active in sports like swimming and karate, sports, which have taught him discipline, endurance and working in a team. Growing up nearby Düsseldorf Nicolas got to know many different people and cultures, so that he soon got interested in politics and international relations.
Willing to improve his knowledge about his homeland Nicolas decided to move to Sofia, Bulgaria in 2011 and finish there his secondary education in the prestigious German International School “Deutsche Schule Sofia”. Thanks to the experience gained by moving there, but also by travelling around the world in the past, he now can easily adapt to new surroundings and cultures.
Living in Bulgaria Nicolas first became a member of Rotary International’s youth programme Interact, but then, in 2012, even took the president’s position in the community based Interact Club „Sofia –Sredets”.
Following his interests Nicolas participated in the first worldwide simulation of the United Nations Global Compact and later took part in the 5th annual SOFIMUN conference.
Indentifying his own world views in the work of the SOFIMUN Foundation Nicolas became at the age of 17 one of the youngest members of the organization.